According to a November 2017 article in Infection Control Today, healthcare workers continue to incur sharps injuries. Exposure to contaminated suture needles remains a significant occupational hazard to this day despite passage of the Needlestick Safety and Prevention Act (NSPA) by Congress in 2000. Although significant progress has been made to reduce hypodermic needle injuries, progress in addressing suture needle injuries has been less successful. Between 2007 through 2017 the frequency of reported suture needle injuries has remained relatively constant. Because the frequency of sharps and needlestick injuries remain at an unacceptable level for those within the healthcare industry, International Sharps Safety Awareness Month was established. Both the International Sharps Injury Prevention Society (IISIPS) and the Alliance for Sharps Safety and Needlestick Prevention in Healthcare played pivotal roles in furthering this campaign. Each December, the healthcare industry is encouraged by those behind International Sharps Safety Awareness Month to assess their current approach to sharps safety and to implement solutions that are designed to protect everyone from the daily hazards posed by sharps and needles.

Solutions for Needlestick and Sharps Injuries
The CDC and National Institute for Occupational Safety and Health (NIOSH) refer to the hierarchy of controls to implement feasible and effective control (injury prevention) systems. The idea behind this hierarchy is that the control methods at the top of graphic are potentially more effective and protective than those at the bottom. Following this hierarchy normally leads to the implementation of inherently safer systems, where the risk of injury has been substantially reduced. According to NIOSH, “Elimination and Substitution, while most effective at reducing hazards, also tend to be the most difficult to implement in an existing process.” 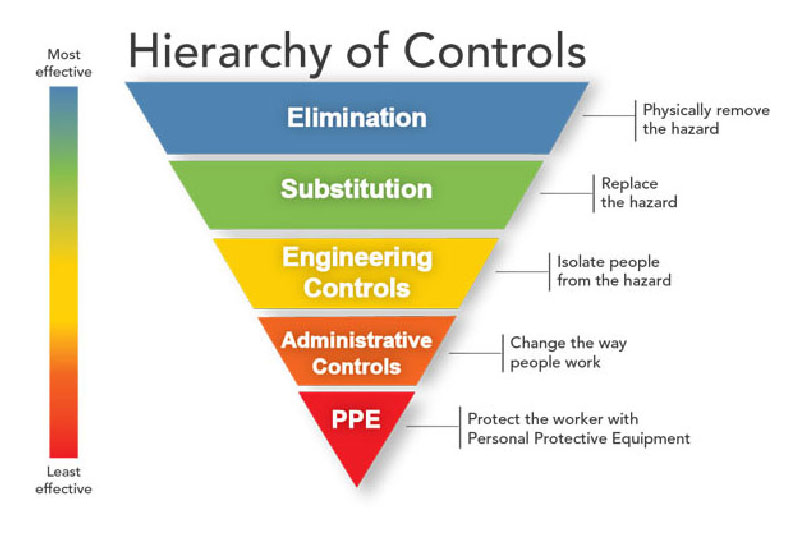 “Engineering controls are favored over administrative and personal protective equipment (PPE) for controlling existing worker exposures in the workplace because they are designed to remove the hazard at the source, before it comes in contact with the worker. Well-designed engineering controls can be highly effective in protecting workers and will typically be independent of worker interactions to provide this high level of protection. The initial cost of engineering controls can be higher than the cost of administrative controls or PPE, but over the longer term, operating costs are frequently lower, and in some instances, can provide a cost savings in other areas of the process.”

To decrease sharps injuries the IISIPS recommends the following actions to be taken:

Engineered safety devices have been demonstrated to help reduce sharps injuries. While much has been done to reduce injuries from hypodermic needlesticks with the introduction of safety syringes, not much has been developed to reduce needlesticks from suture needles. In fact, according to the International Safety Center, suture needles were the primary cause of sharp injuries in 2015 thru 2017. As noted by the sharps injury (SI) Prevention Stakeholder Group, the operating room (OR) is one of the most hazardous settings in the hospital and suture needles account for more sharp injuries than all other reported OR sharps injuries together.

These numbers from the International Safety Center illustrate that there is a continued hazard with suture needles that needs to be addressed. While the rate of reported needlesticks is still high, what is more alarming is that the CDC estimates that approximately 50% of sharps related injuries goes unreported. The Joint Commission also estimates similarly, between 30%-73% go unreported. When the EpiNet reported suture needlestick data is extrapolated over the number of hospitals in the United States, in 2017 approximately 140,000 reportable sharps injuries were caused by suture needles in the U.S. alone!

Sharp Fluidics® engineered the Operative Armour® System to enable clinicians to self-dispense and self-secure suture needles at the point of use on the surgical field with the goal of reducing sharps injuries caused by suture needles. The patented Needle Trap is the first standardized means to render both tips of all suture needles innocuous for subsequent handling, offering significant safety and workflow efficiency improvements while maintaining compliance to American PeriOperative Registered Nursing (AORN) guidelines.

By utilizing the Needle Trap within the OR, clinicians can self-secure at the point of use to completely eliminate exposed contaminated needles passage. The Bloodborne Pathogen Standard established by the Occupational Safety and Health Administration (OSHA) requires all facilities to “document annual consideration and implementation of newly available safer medical devices designed to eliminate or minimize occupational exposure.” Scheduling an evaluation of the Sharp Fluidics Needle Trap during December’s Sharps Safety Awareness month is a perfect opportunity to get this accomplished for the upcoming year.